The classic Mickey Mouse cartoon. Steamboat Willie is a 1928 American animated short film directed by Walt Disney and Ub Iwerks. It was produced in black-and-white by Walt Disney Studios and was released by Celebrity Productions. The cartoon is considered the debut of Mickey Mouse and his girlfriend Minnie, although both the characters appeared several months earlier in a test screening of Plane Crazy. teamboat Willie was the third of Mickey’s films to be produced, but was the first to be distributed because Walt Disney had, having seen The Jazz Singer, committed himself to producing the first fully synchronized sound cartoon.

The film is especially notable for being the first Disney cartoon with synchronized sound, including character sounds and a musical score. Disney understood from early on that synchronized sound was the future of film. Steamboat Willie was the first cartoon to feature a fully post-produced soundtrack which distinguished it from earlier sound cartoons such as Inkwell Studios’ Song Car-Tunes and Van Beuren Studios Dinner Time. Steamboat Willie would become the most popular cartoon of its day. 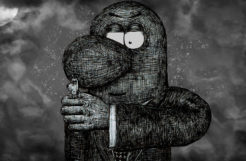 Amaro and Walden’s Joyride – The Line