Bartkira is an animated parody mash-up of The Simpsons and Akira. Based on an idea by Ryan Humphrey articulated through comics, the concept was expanded with the Bartkira project, a comic collaboration of Simpsons fans, curated by James Harvey.

In association with the comic, Moon Animate Make-Up producer Kaitlin Sullivan pitched the idea of an animated trailer to match and with the work of over fifty artists, produced the Bartkira animated trailer. 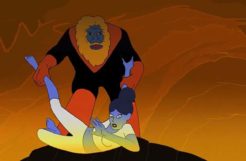 つままれるコマ / Bring me up – Miki Tanaka