“In an attempt to help themselves they’ve created a system, a pattern, that despite their attempt to create an utopia have given birth to the exact opposite.”

Mads Broni // Copenhagen // sprung from the Danish highlands, Mads attended the esteemed Danish School of Media- and Journalism in Copenhagen where he after graduating continued to conquer the internationally renowned, Hyper Island. He has several years of experience in the industry, working in Copenhagen, Stockholm as well as London. Due to his growing network as a freelancer, he decided to found BNDL to assemble an international team of designers, illustrators, and animators to help each other out on bigger project. He also has a background as a percussionist which combined with his love of feature films, anime and video games has helped him tremendously in his craft. 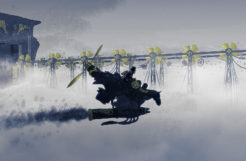 Less Than Human by The Animation Workshop

The Fisherman by Luke Saunders

At least what I think… by Nas Alhusain

The Fisherman by Luke Saunders

The Wisdom of Pessimism – Claudio Salas