Le Gouffre is the first animated short film produced and directed by Lightning Boy Studio, a young creative team based in Montreal. The film tells the story of two spirited travelers who come across an incredibly wide chasm on their journey and decide to build a bridge to cross it.

Released in February 2015, the project had first gained a lot of attention following the huge success of its Kickstarter campaign, which allowed the creators to finance the movie’s post-production.

Short film “Claustrum / the place for only one” 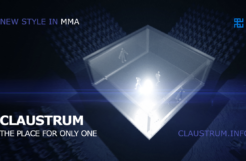